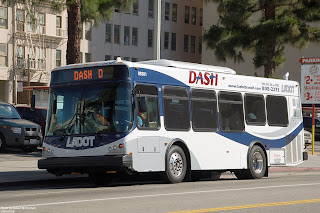 Small buses could have a big impact on efficiency
Source: Canadian Public Transit Discussion Board

I encourage people to ride transit, but transit needs to do more to green itself and to operate more efficiently, comfortably and conveniently.

In places with low population density, like suburbia, there are often bus routes with infrequent service and many empty seats. But what if the bus were smaller on these routes?

If the bus were smaller, it would likely have better fuel economy, saving the transit agency money and reducing pollution, without causing crowding (because of the low ridership). These savings could be taken to pay for more frequent service, thus reducing to some extent the main thing that holds suburban transit back: having to wait forever between buses.

I'm speaking at a really general level here of course. I don't know how much money could be saved by doing this, and it would involve one-time capital costs (buying smaller buses).

However, it seems worth looking into. Transit agencies have very limited resources, and they need to root out waste wherever possible if they hope to offer service that can attract new riders. Small buses on routes with low ridership could be a powerful tool to free up resources for more convenient service, and to bolster the green credentials of transit.
Posted by Chewie