Into the West(ern Green Line Stations) 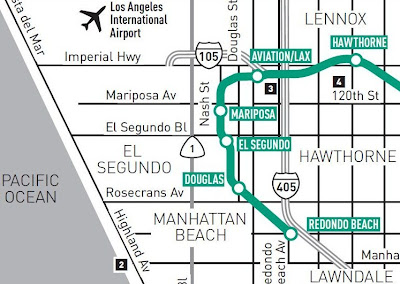 Source: Metro
There's a lot of talk about rail into Los Angeles International Airport and how the Green Line should have done that but didn't. Instead it basically runs the length of the 105 and then dips south near the corner of LAX into the cities of El Segundo and Redondo Beach. So, I thought I would examine whether or not the line is doing something useful down there. I've got pictures . . .

Once I headed west of Aviation station, where you catch the free shuttle to LAX, the first thing I noticed was the massive office buildings off the 105 and their equally massive parking structures. 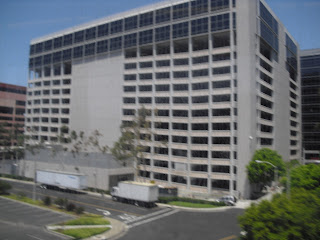 Gee, are you sure 11 stories of parking are enough?

So, we're not off to a promising start with that massive parking deck, or with this one: 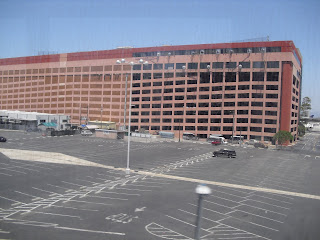 I like how they threw in a ton of surface parking just for good measure. I'm sure you could walk across that parking lot in an hour or so . . .

These buildings are adjacent to grade-separated rail, but they're clearly not anticipating that anyone will actually use it to get to work. No other land uses in sight by the way, even though the parking lot above could accommodate a ton of housing and retail to support the area.

It wasn't all bad. I did see a surface parking lot covered in solar panels a bit farther down the line: 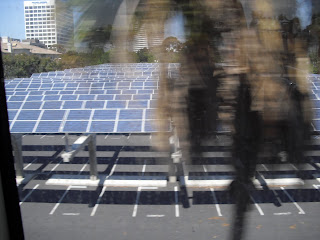 I'm not a fan of surface parking lots. Since they waste so much land, I'll never call them "green". However, if you're going to build one, this is probably the best way to do it from an environmental perspective. You shade the cars and generate electricity at the same time. This area too is overwhelmingly office buildings. The huge parking lots don't stop either: 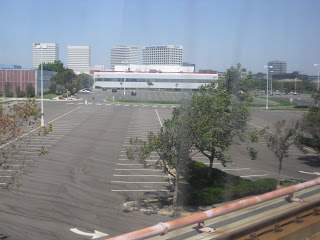 There's a building back there, I swear

So I get to the end, Redondo Beach Station, and I get out for a walk, determined to see if this area is an unbroken string of office buildings and oceans of parking or if it actually mixes land uses a bit. It turns out that it does have some housing and retail. The housing I saw was stuff like this: 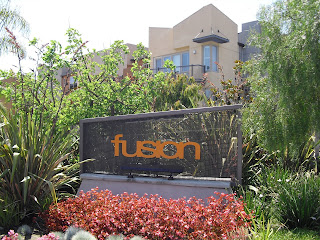 Low rise apartments, kind of dense, but not terribly close to the station itself. There was retail too, but it was all clustered in an uber stip mall that had so much parking and was so hard to see from the train and was so poorly interspersed with the surrounding office buildings, that I was too depressed to photograph it. I ended my walk at Douglas Station and went home.

I love how the Green Line is 100% grade separated, I just wish the area around its western stations were doing something to support it.
Posted by Chewie