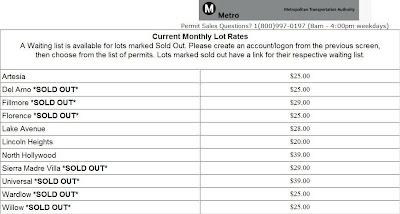 Metro has tens of park and ride lots with tens of thousands of spaces according to this spreadsheet from their website. Most of these spaces appear to be offered up free of charge. I thought I'd leave aside the question of whether or not that is a good idea and focus in on the spaces that drivers already have to pay for.

From the graphic above you can see that 11 park and ride lots have spaces available for monthly lease. What struck me is that in 7 (64%) of these lots the spaces are sold out. At that point my sense of basic microeconomics kicked in. Doesn't sold out mean that demand is greater than supply at the price being charged? Wouldn't it be logical for Metro to raise rates on these spaces or to expand the number of spaces that you have to pay for at these particular lots both to raise money and to give other people a chance to park?

Or perhaps it makes sense to keep the spaces artificially cheap for the benefit of the drivers lucky enough to snag them.

Guess what I think :)
Posted by Chewie

Email ThisBlogThis!Share to TwitterShare to FacebookShare to Pinterest
Labels: park and ride